Agates are my favourite stones to collect, cut and polish, and even new rockhounds can recognise some of the more distinctive agates with relatively little knowledge. So here is a short quiz and some pointers of what to look for.
WHAT IS AN AGATE?
Agates, like jasper, flint and chert, are made of cryptocrystalline quartz (silicon dioxide = silica). This means that the quartz is in the form of ‘micro crystals’ that cannot be seen with the naked eye. Agates are usually recognised by being translucent with distinct bands, while jaspers, flint and chert generally do not show bands and contain high levels of minerals that make them more opaque. However, the distinction between agates and jaspers and other rocks can be blurred; some jaspers have patches of banded agate, and many of our opaque local rocks that are called jaspers have rather little silica compared to the famous ‘porcelain’ jaspers found in the U.S. To complicate matters further, translucent quartz stones without banding are often called agates, and any rock or fossil with a high level of cryptocrystalline quartz is often said to be ‘agatized’.
The general name for cryptocrystalline quartz is chalcedony (pronounced kalcedony), and non-banded forms coloured by small amounts of certain minerals are give special names, such as carnelian (orange due to iron impurities) and chrysoprase (green due to nickel impurities) although carnelian showing banding may also be considered an agate. There has recently been an attempt to define an agate more scientifically, with the suggestions that a true agate has its microscopic quartz crystals arranged in fibres, whereas these crystals in jasper, chert and flint are granular. Obviously, your average rockhound can’t see the microscopic arrangement of quartz crystals, so most identify agates by intuition, experience, and convention, which is what we will do here.
WHICH OF THESE STONES IS AN AGATE? 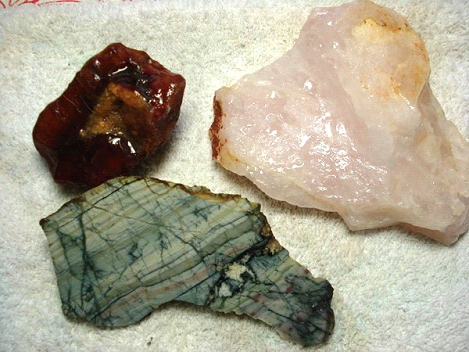 The answer is the top left stone, which is a broken nodule of carnelian (because of its orange-brown colour) agate from Oregon. It’s an agate because it’s made of quartz (cannot be scratched by a penknife), is translucent, shows some banding (the outer layer is a lighter colour than the inner one) and no visible crystals can be seen within the bands although visible crystals line the cavity inside the nodule. The rose quartz stone on the right is formed from a mass of visible rose quartz crystals, and the bottom stone from near Port Alberni lacks the translucency of an agate and could be called jasper as it has some silica in it (see the white quartz patch?), but obviously contains a lot of other minerals to make it opaque and multicoloured. Most likely the silica impregnated this rock after layers of silt had already formed.
CAN YOU NAME THESE AGATES? 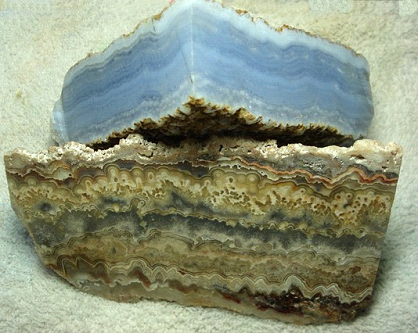 These are two of the most easily recognised agates. Both are “lace” agates because of their lacy patterns. The top is African blue lace agate from Namibia and the bottom is one of the many types of “crazy lace” agates from Mexico that vary in colour and pattern. Note how the patterns in both rocks are in horizontal bands indicating that the layers were deposited horizontally in the host rock’s cavity, but the layers are not smooth, possibly, in the case of the crazy lace, due to minerals being deposited on one chalcedony layer before being covered by another.
WHERE DO THESE AGATES COME FROM? 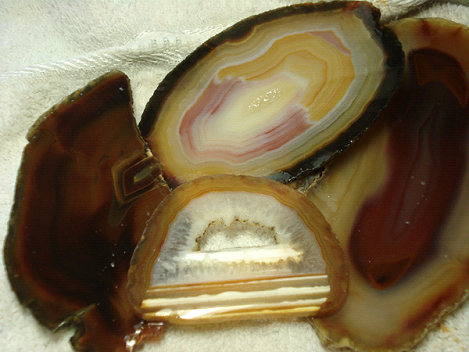 The answer is Brazil. These are the most common agates seen in rock shops and gift stores that are formed into coasters, wind chimes, and other trinkets. They occur in small to very large nodules with brownish banding and often have hollow centres lined with visible quartz crystals as seen in the bottom slab. In most cases, the chalcedony is deposited in layers around the inside surface of the nodular-like cavity in the host rock, but note the horizontal layering in the bottom slab at what was probably the bottom of the nodule. This suggests that some of the silica-rich fluid entering the nodule settled into layers by gravity (this horizontal layering is sometimes called “water banding” and is often seen in nodule agates). Brazilian agate slabs are often heat-treated to enhance the red/brown colour, or dyed blue, pink, or green.
The top slab in the photo is from an unheated, rarer and more expensive, Piranha agate, from the Parana region of Brazil. These agates are famous for their unusual colours and patterns.
WHERE WOULD YOU GO IN CANADA TO FIND THIS AGATE? 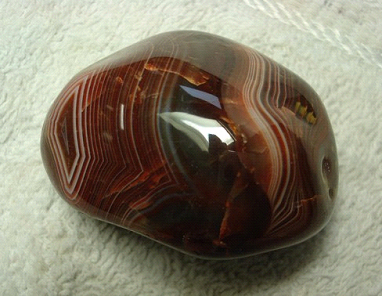 The answer is gravel deposits around Lake Superior near Thunder Bay. Lake Superior agates are found in gravels widely distributed around Lake Superior and into Michigan and Minnesota. Their distinctive features are the reddish-brown and white banding, their occurrence in gravel beds as well-worn pebbles, and the multitude of fractures that make it difficult to cut them into large cabochons!
HOW MANY CONTINENTS DO THESE AGATES COME FROM AND WHAT ARE THEY? 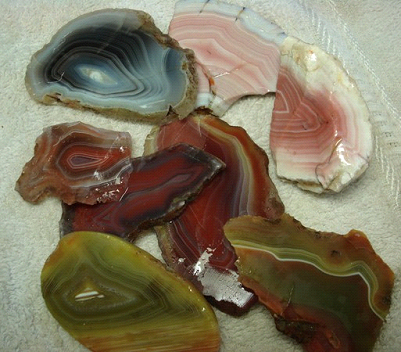 The answer is two; Africa and Australia. The top left is a typical Botswana agate (from Botswana!) with its purple-grey and white banding, and there are few other agates that look like this. The dark red and yellow agates are Queensland agates from Agate Creek in Australia. The purple and red banding is fairly typical of these agates, but there are other agates from other areas in the world that can look similar, especially the ones with more yellow. Note the apparent similarity between the two pink agates – but the one on the left is a pink form of Botswana agate and the right is from Agate Creek – and neither is translucent. They are both considered agates because they are obviously formed in close association with the other agates, but for some reason have more opaque impurities.
DO THESE AGATES COME FROM THE SAME AGATE BED? 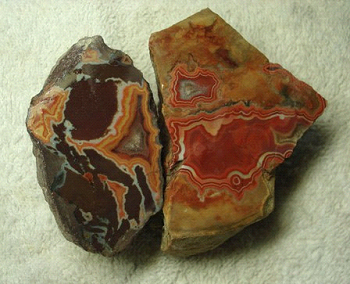 The answer is no. The colour and appearance of the banding suggest that they were formed in a similar way but the matrix of each nodule is clearly a different colour. The nodule on the left is from the famous Dryhead beds in southern Montana while the one on the right is from the equally famous (and tick-infested as we found out) Teepee Canyon near Custer in South Dakota. However, these places are geographically close enough for them to share features of agate formation.
TO BE OR NOT TO BE AN AGATE
There are a huge number of “agates” that don’t fit some of the more recent definitions, but are still regarded as agates by most rockhounds. Usually, they are distinguished by the shape of mineral deposits embedded in the chalcedony.
IS THIS AN AGATE OR A JASPER?

This is Youngite from Wyoming, a very distinctive rock, which online is identified as both a jasper and an agate. It obviously is a breccia as it contains chunks of broken rock that have been encased in chalcedony, but a close look shows banding of the silica around the included rock and around the small hole lined with tiny quartz crystals. Thus, it seems more like an agate than a jasper.
Easy to identify but more difficult to define is this one:
WHAT IS THE NAME AND WHERE DOES IT COME FROM? 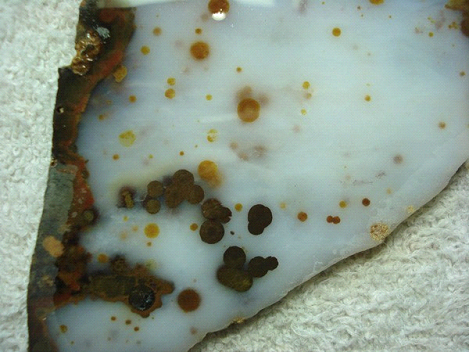 The answer is Polka Dot agate from central Oregon. It occurs as large masses and rarely shows banding. It is not as translucent as many agates, but it polishes to a lovely milky glow with “polka dot” inclusions forming interesting patterns. Some people call it a jasper, but I’ve only seen it called an agate by rock dealers.
WHERE DO THESE COME FROM? 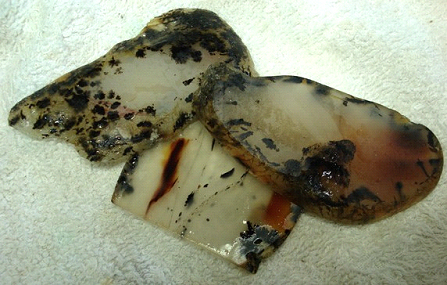 The answer is Montana. These are slabs of Montana agate from the North East part of the state. They are found as nodules in gravel banks around the Yellowstone River and they sometimes show some banding (as in the middle slab). They are famous for their moss-like inclusions of manganese oxide that “grow” out from the edges of the nodule to form shapes of moss, trees, etc. As these inclusions are often just around the edge of the nodule, it has to be examine closely while wet before deciding the best way to slab it.
WHAT NAME WOULD YOU GIVE TO THESE AGATES?

The answer is “moss agates”. Like the many types of moss agates, they contain moss-like inclusions of various minerals. Moss agates can be found in many localities and in either nodules or large rock masses. Their source can be difficult to identify because so many look alike when slabbed. On the left is one of the more identifiable ones. It is Riviera agate from Mexico and the brown, beige and white patterns in the blue – white chalcedony are unique to this agate. In contrast, the lovely moss-like inclusions in the slab on the right can be found in many moss agates from all over North America.
THIS IS ANOTHER OF THE FEW MOSS AGATES THAT ARE EASILY RECOGNISABLE. WHAT IS IT? 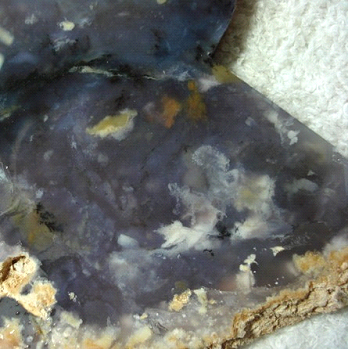 This answer is amethyst sage agate from Nevada, which occurs in small –to –large nodules and is characterised by its outer white coating and orange and black inclusions embedded in a deep purple agate. This slab does not show the purple very well as I’ve cut all the best bits into cabs!
WHAT IS THE NAME OF THIS TYPE OF AGATE? 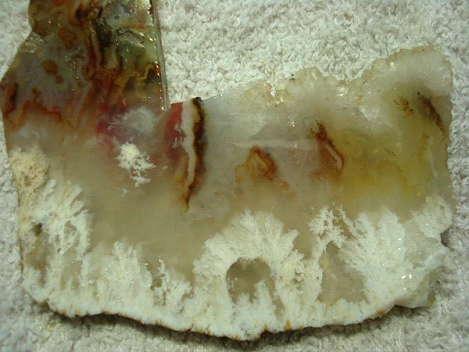 The answer is “plume agate”, because of the large, plume-like mineral inclusions. The most famous of these in North America is the Graveyard Point Plume agate from Northeast Oregon. This is a seam agate and the white (and sometimes multicoloured or even black) plumes in the almost transparent agate can make striking cabs.
ANY GUESSES AS TO WHERE THIS AGATE COMES FROM? 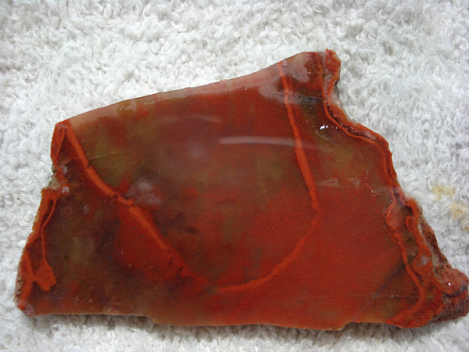 There are many types of chalcedony, particularly in the desert regions of North America, that could be from many different localities and which could be defined as either a jasper or an agate depending on the degree of translucency and one’s particular fancy. This is “Pigeon Blood agate” from Utah. It can be more translucent with blood-red splotches or less transparent with more orange as in this slab. Note, however, the bright red lines which are often found in this type of agate, and when present, strongly suggest that this rock comes from Utah.
MORE INFORMATION
For recent information and gorgeous pictures, see Agates: Inside Out by Karen A. Brzys, 2010, published by the Gitche Gumee Agate and History Museum in Michigan (available on Amazon.com but I got my copy at the Rockhound Shop in Victoria), and also Agates and Jaspers by Ron Gibbs, 2009, also available at Amazon.com. at a horrendous price since it’s out of print, but the photos are just gorgeous.